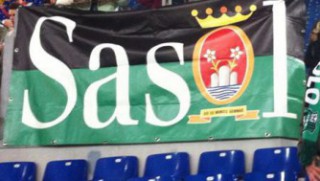 "Sasol" is the historical group of black and green supporters born in the 2007 at the same time as Sassuolo's rise in Serie B.

Today, after 10 years, the "movement" evolved with the official seat in via Rocca 11 in the old town centre of Sassuolo, a web site and a constant harmony with the groups of the organized support.

The objective is to bring in the curved sector the greatest number of supporters either at home or away in support of the black and green colours in any case.

The section "Giorgio Mariani" is made up of the historical fringe of sassolesi supporters in memory of the late sassolese football player who brought the Sassuolo Calcio in the professional league in the early 1980s.

The deviser was Paolo Orlandi, former editor of "Forza Sassuolo", the newspaper born with the Sassuolo among the professionals.

The editor was Antonio Orienti and the sports editors were Mario Pelati, Erio Stechezzini and Mauro Pifferi, besides Orlandi.

Sassuolo's president was the unforgotten Claudio Sassi whit Giorgio Mariani who was the general editor.